Welcome to my city! 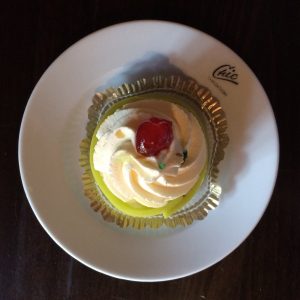 A traditional ”Prinsess-bakelse” at Chic

Once and for all – Fika has become a misused word. Fika is first and foremost a coffee break. At work or between chores. Fika is not very sumptuous. But since most official agencies that promote Sweden abroad have hi-jacked the word Fika, I’ll use it as well. In the very much broader sense, where Fika also includes Kafferep (like High Tea but with coffee, cookies, buns, sponge cake and cake instead) and Gå På Kondis (celebrate the weekend at your local bakery with coffee and ”bakelse” (small cake with creamy fillings)).

One general piece of advice – unless you want to feel like you could be anywhere in the world, avoid the coffee chains. Yes, we have them here in the North as well, the international ones like Starbuck’s and Dunkin’ Donuts and the Scandinavian ones like Espresso House and Wayne’s Coffee. There is nothing wrong with them except that they are everywhere, EVERYWHERE and of course, that their presence makes life for the smaller and more genuine establishments harder.

At Chic konditori at Mariatorget (Södermalm) you can enjoy the whole shebang of Gå På Kondis. The buns are great, they have real Swedish småkakor (Swedish cookies are generally small, you would want to have many different sorts) and of course, they have several of the traditional bakelser (filled pastries).

This really seems silly after I’ve ranted about the international coffee chains, but I once had an Italian Airb’n’b-guest who stated that she wouldn’t have pasta or coffee outside Italy and I felt such pity for her that I needed to ask my Facebook Family if it was possible to have a real Italian cup of coffee in Stockholm. And hey presto! I got an unanimous answer. This is the only place. Poli Caffé in Kungsholmen.

COFFEE-ROOM AS IN A FORGOTTEN PAST

Sturekatten is a set of rooms on two floors. You get to the counter after walking up a windling set of stairs. They serve the same hot sandwiches with mayonnaise, shrimp and melted cheese and the same meringue-topped apple pie served with vaniljsås (custard-ish) as I had as a school-girl almost forty years ago.  It’s a very, very special place. Especially at off hours, then you can get a feeling you’re Doctor Who – you’re a time AND space traveller. You’re going back to the sixties and you’re going away to a much smaller town. Lose yourself in meditation over numerous cups of coffee, let time fleet, make yourself at home, bring books and magazines,  listen to the odd conversation and secrets being passed, make notes, mental or in writing.